Kate Paine is the founder and CEO of Standing Out Online. She helps executives and entrepreneurs stand out online so they become a recognized authority in their marketplace, and a respected asset to their company and clients.

Leverage Your Personal Brand, Differentiate Yourself in the Marketplace, and Attract a Steady Stream of New Clients.

Let's discuss your needs and see if we can help.

Your Slice-Of-Life Story Can Define Your Personal Brand

Growing up, I wanted to be the next Diane Sawyer on CBS TV’s ’60 Minutes’ news program.

While that never happened. I did come close. Sort of.

During college in the late ‘80s, I was accepted as a production assistant intern at 'CBS This Morning' (during the Harry Smith and Maria Shriver co-anchor days), and later, working as an intern in the Northeast Bureau of the ‘CBS Evening News with Dan Rather.’

Being an intern in those days was certainly not paid (college credit only), and if you were lucky, a national correspondent might buy you a cup of coffee or a Snickers bar on occasion.

And while I was so gung-ho and ready to do anything and everything that was asked of me, it didn’t take me long to realize that being in front of the camera was not going to be my thing.

In fact, working in corporate broadcast was not where I wanted to be either. Interning at CBS was an enormous opportunity for me to realize what I didn’t want to do. It was at CBS News where I learned I wanted to do research, be behind the camera, and work – some day – as a producer. My slap-up-side-the-head moment at the time was that I knew I wanted to tell stories of some kind (news or other), provide meaningful information, but ultimately, this Vermont girl did not want to live in the Big City.

Those almost three years at CBS was where I started to develop my chops as a rookie journalist. (It’s where I also realized I didn’t want to wear caked-on makeup, have my nails done, nor have freeze-dried hair just to be on camera to tell the news.) I learned to be bold, not to whine, and how to do some kick-ass research. To this day, my research skills carry me through my personal and professional life daily. I’m good at getting to the guts of just about anything.

After graduating from college, I returned to my home state of Vermont. Turns out I could carry my love of research, storytelling, and video and photography work back home. There certainly weren’t as many opportunities in the news world here but I found my way. Slowly but steadily.

My entrepreneurial drive revealed itself soon after graduating and within three years I’d established my own video production business. Remember, of course, this would have been the early ‘90s and there was no such thing as digital anything at the time. No internet, no cell phones, etc. (I’m totally dating myself.) We used tape and film and lots and lots of heavy equipment.

A few cool projects came my way during that time. Most notably was when I was hired to be a still photographer for a group of mystery VIPs coming to Vermont from all over the world for some global TV event. A local PR gentleman and family friend referred me to this company from England. The company? Range Rover. As in the car company.

While working on a project with Range Rover sounded very cool, I couldn’t imagine the VIPs would be anyone of personal interest to me. Probably car magnates, executives, adventurists, and maybe a recognized spokesperson or two.

The project was tightly held under the radar and no news organizations were to learn of the event. Once the VIPs arrived in the Green Mountains, it would be different but they didn’t want any advance PR throughout the state until the project was underway.

I was directed to show up at the Stowe/Morrisville airport one sunny fall afternoon. My calendar was booked with this group for the next 10 days. I was paid $800, in advance, and I was thrilled. But I had to agree to give over all my film on the spot, and couldn’t keep any negatives for myself.

My curiosity was piqued, to be sure.

I waited on the tarmac, two cameras on the ready hanging off my neck. Finally, a couple small jets landed at the rural airport and a few shiny new Range Rovers pulled up close to each of the planes.

The VIPs stepped off the planes and at first I didn’t recognize any of the people. Except one, a stout gentleman with a beard and glasses.

He looked very familiar: it was Francis Ford Coppola, one of the most respected and well-known film directors in the world who directed, among many other Oscar-winning movies, ‘The Godfather’, ‘Apocalypse Now’, and Bram Stoker’s ‘Dracula.’

I was stunned! My job, I’d been told, was to “be in the background” and take photos of the daily goings on of this group, the Range Rover crew, and the London-based TV crew, which would be arranging daily, global satellite telecasts over the next several days. The photos were being used just to have as a record of the event and none would be used for any kind of publication.

While I stayed in the background at first, mostly with the crew, several of the guests introduced themselves to me and over the coming days, we became fast friends. A retired editor of National Geographic, a publisher of Earth Watch magazine, world famous photographer, Lord Patrick Lichfield (and first cousin of Queen Elizabeth), and many others.

But this little ditty isn’t solely about the VIP event itself, it’s about story – (a part of) my story – and why stories are our greatest assets.

A story can captivate, hold another’s interest, and certainly provides information. In the interest of modeling how I work with my clients to tease out THEIR stories, I want to point out how this VIP event changed me. How it affected what I’d do later in life. Today, even.

My ‘A-Ha’ moment during this time spent with some very fascinating people - who were all just regular human beings like the rest of us - was this: that I should never give my professional skills away for free or low fee. And it was Francis Ford Coppola who gave me that precious piece of advice. I was 28 at the time.

The final night before the event wrapped, Coppola wanted to make dinner for his fellow guests and for the entire 20-person crew, including me. His wife and their group were staying in one of the guest houses owned and operated at the time by the Grafton Village Inn/Wyndham Foundation in Grafton, Vt.

Dinner had been scheduled to be prepared and presented by the Grafton Village Inn chef and staff but Coppola wanted to make dinner himself. While the London TV crew was filming B-roll of him preparing food in the kitchen, I was taking a ton of pictures.

He engaged me in conversation asking how I got this gig and what I did for my business in Stowe. I told him I wanted to be in the video production field and was still toying with the idea of working for a news organization.

The more we chatted, I mentioned I’d be honored and thrilled if he ever needed a production assistant for any of his upcoming projects just for the chance to work beside him. I’d travel to LA, I’d do “anything!”

He stopped what he was doing. (He was preparing – and he loved to announce this – Martin Scorsese’s mother’s lemon chicken recipe.) He took me gently by the shoulders, looked me in the eyes and said, essentially, “don’t ever give away your professional talents or services for free. They have value and you deserve to be paid well for them.”

Now, did that piece of advice in that moment ever keep me from taking work at low or no cost ever again? Unfortunately, no. But we all learn in our own ways and time. And, as you can see, I’ve never forgotten this story. I recall what I was wearing and what Coppola was wearing, too. The memory is vivid.

SEE WHAT I DID THERE?
As I work with my clients helping them tease out their stories, my goal is for them to discover a nugget of their story, which defines who they are and is relevant to their professional story. You never consider how the many stories you’ve lived (and are living!) have played into who you are, your expertise, and how it sets you apart from literally everyone else.

This is what makes you unforgettable. That nugget – when used well with targeted messaging and relevant to your career – what sets you apart. It builds a connection with your audience.

And if you’re online (or off), building a connection with your audience is what helps people get to know, like, and trust you. That’s what I do, help you determine what differentiates you from all others.

In my last year as an intern for the Northeast Bureau, I had a chance to ride the elevator with Charles Kuralt. He had been one of my favorite journalists when I was growing up. His “On the Road with Charles Kuralt” took him all over the country interviewing the quirky – and not-so-quirky – people he met along the way.

I hesitated to get on the small elevator with him at the 57th Street Broadcast Center. But I chose to be bold and stepped on anyhow. He had emphysema from his years as a chain smoker and he was out of breath. As we stepped out on to the same floor, I found the guts to introduce myself to him.

“Mr. Kuralt,” I said shyly. “I’m an intern here in the Northeast Bureau and I’ve been watching ’60 Minutes’ with my father since I was about age 10. I’m from Vermont, and it’s an honor to meet you.”

He was pleased that I’d introduced myself and told me how much he loved Vermont. It was one of his favorite places. (I knew that from his show.) We had a nice chat, he asked about my internship and my goals – at the time – to become a journalist. He told me to stick with it.

That was as close as I came to my ’60 Minutes’ stint. Unless, of course, you count my seeing Mike Wallace, Morley Safer, and Andy Rooney on the other side of the CBS cafeteria one day.

Navigating today’s world isn’t at all cut and dry, but there is still an audience that needs what you offer and there is still a meaningful way to share your message. If you’re ready to leverage LinkedIn, reach out. I’d be happy to discuss ways I can help.

What Is A Personal Brand?

How A Bad Dream Helped My Business

How To Discover The Story Behind Your Personal Brand

How To Use LinkedIn To Develop Your Personal Brand 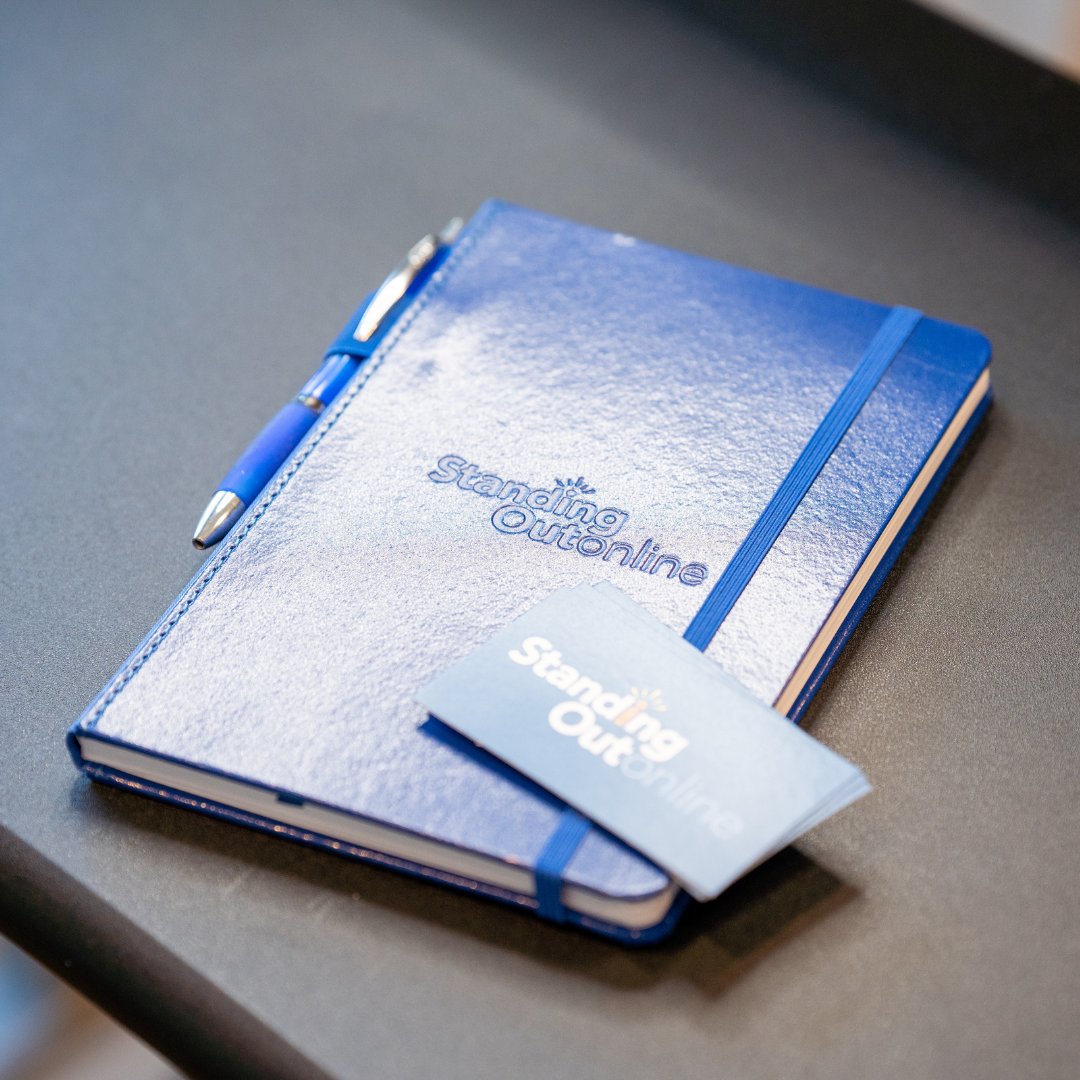